Corporate Training that stands out

Elevate your training programmes to the next level

AVRT create bespoke Virtual Reality training packages based on our innovative free-roam, natural and fully-immersive platform as well as using other technologies. Elevate your training programmes to the next level with the use of immersive experiences that truly enable the user to ‘learn by doing’. Light years ahead of passive 3D video delivery or classroom based training, the AVRT platform allows users to interact with physical objects as part of the scenario or to use advanced haptic technologies to bring digital items to life.

AVRT allows any kind of training to be de-risked and carried out in a fully repeatable way that can be assessed in detail. This makes it ideal for virtually any type of learning but particularly safety and procedure-based training. Adding AVRT’s instructor led capability adds a completely different dimension, allowing training to occur under enhanced cognitive load, truly examining critical decision making under stressful conditions.

The London North Eastern Railway (LNER) is a national rail service that operates along the east coast main line network. As part of a continuing investment and modernisation programme, LNER began to introduce Class 800 and Class 801 trains from 2019 to replace ageing rolling stock on the network. These new trains, built by Hitachi, have been branded ‘Azuma’ by LNER, and offer high speed services along the entire length of the ECML.

Bringing these Azuma class trains into service required LNER to provide additional training to their employees. This training is there to allow for the safe and efficient operation of all the onboard facilities. One element of this training covers the safe handling and deployment of the onboard access ramp, for wheelchairs and other mobility vehicles. LNER sought to improve the delivery of this training by making use of VR technology to reduce risks and improve training effectiveness. In order to achieve this, LNER set about finding a technology partner that could provide them with an initial proof of concept solution that, if successful, could form the basis for a wider rollout. This wider rollout would not just be for accessibility ramp training, but also for other training which may currently have logistical, safety, cost or other constraints placed upon it. AVRT were pleased to work with LNER to understand their requirements, and deliver a VR solution to meet their needs. 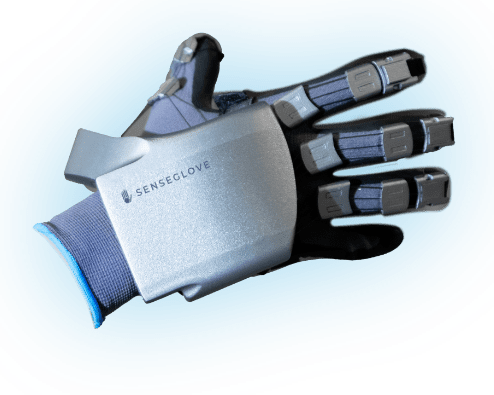 In order to provide an effective training environment, it was clear that a number of technical challenges would need to be overcome. One such challenge was mimicking the tactile feedback of holding a physical object, something that’s typically lacking in most VR systems. Since the majority of the training required the handling and manipulation of the ramp, along with the use of keys to open doors as well as isolating features on the train, it was clear that tactile feedback would play a large part of the project. AVRT partnered with Senseglove to evaluate their new haptic sense gloves, with a view to incorporating them into the system. Senseglove were able to provide their latest technology, the Nova gloves, for use in this project, allowing for haptic vibration sensations, as well as the ability to restrict finger movement. This restriction of movement provides a way to give the illusion to the wearer that they are physically holding something that only exists virtually.

The next challenge was to provide a virtual environment for the user to work within, which recreates the train interior closely, and offers the right environment to provide convincing and effective training. Working with our in-house 3D designers, LNER provided technical drawings for the train which allowed us to create an accurate virtual representation of the working area and onboard equipment. LNER also granted us full access to the Azuma trains to allow us to capture reference imagery which assisted us in the production of the environment. The end result was a realistic virtual space, that included all the key details necessary to allow the user to be fully immersed during the training.

Solving these challenges during our development process allowed us to create a fully immersive VR solution which fully met with the requirements of LNER. By optimising performance to allow it to be used on untethered and fully standalone VR headsets, we were able to deliver a portable, cost effective and simple system to help solve some of the challenges LNER currently face with this type of training.

“The initial vision for the project was to prove that virtual reality could be developed and used in training to provide our frontline teams with enough confidence to operate equipment to better serve LNER customers. AVRT were thrown in at the deep end on the project with an 8-week deadline (after a previous VR partner had to leave the project), to scope and fully develop a working VR environment.

AVRT met with us on a weekly basis and showcased the progress made on the virtual reality program each week. Every time AVRT took the opportunity to collect feedback, improve and make adjustments so the training program could be as close to real life as possible, and making the process feel like a real collaboration. What was particularly impressive about AVRT was the personal touch they applied to the collaboration. From designing a very detailed station that included full train, posters and information screens to give it a real train station feel, to giving LNER trainers the confidence to setup and use the VR themselves at one of our offices. The amount of people that step over the gap when alighting the train during the VR training is testament to the level of realness and detail AVRT put into the virtual work.

By the end of the project AVRT had developed at pace, within the time frame and delivered a VR environment beyond our expectation. The project won an internal award for best innovation and has received high praise from Directors across LNER. This experience has led to LNER investing more into moving further training into virtual reality and I would definitely go to AVRT for future immersive technology projects.”

Upon completion of the project, AVRT worked with representatives from LNER to run an initial testing day for serving LNER staff members. The aim for the day was to invite staff members to try the VR system, and offer initial feedback. Staff members were invited at random, with some having no prior knowledge of the access ramp deployment procedure, while others may have performed the task in a previous role or are currently performing this action on a regular basis.

The VR application was designed to guide the user through the various steps associated with safely deploying the access ramp. These steps include various activities from isolating the auto close door mechanism, through to removing and later replacing the ramp securely in it’s storage compartment, and deploying the ramp and ensuring it’s securely positioned before allowing passengers to use it. The feedback from the day was extremely positive. Of those involved in the testing, 90% indicated that after training, they would be happy to deploy the ramp as part of their operational duties, without the need for further traditional training. In addition to this, comments were received regarding the feeling of safety by training in VR, without the risk of making errors that could have wider consequences if performed on a real train.

The excellent reception from this initial testing day allowed LNER to take the VR system with confidence to a larger training day, which also saw favourable comments from those who used the system. The use of the Senseglove Nova to provide haptic feedback further enhanced the sense of realism for the user during the training exercise.

Subsequently, AVRT were very pleased to hear about the positive feedback from various Directors within LNER, as well as learning about the system winning an internal LNER award for Best Innovation within the company. Following the success of this project, LNER are now investing further into VR technologies to provide training in a safe, efficient and effective manner.

Get in touch with AVRT to see how we could shape the future of your corporate training.

Fill in this form and we’ll get right back to you.